Words of Wisdom from DeRay Mckesson

Two summers ago, our neighborhood library hosted a book festival that included a panel with authors April Ryan, journalist and White House correspondent; Michael Eric Dyson, professor and contributing opinion writer for the New York Times; and DeRay Mckesson. I recalled Mckesson’s name from a recent conversation with college students who had been excited to host him on their campus. The students were surprised that I did not know who Mckesson was, asking them how to spell his name, since it was the first time I had heard it.

Now as Mckesson was on the neighborhood library’s panel with Ryan and Dyson, I wondered what book he had authored. As the panel spoke, I never discovered whether or not Mckesson had written a book. All I knew was that he was an activist who shared his experience in Ferguson after the police shooting and killing of Michael Brown. 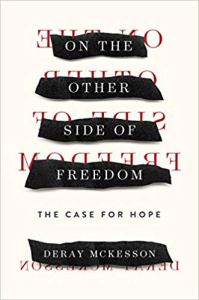 At some point, I read an OpEd piece Mckesson had written for The Washington Post and, since I live outside of Baltimore, I heard that he had raised money as part of a campaign to become mayor of the city. Despite hearing his name several times, he remained on the periphery of my attention. A few weeks ago, I saw Mckesson in Washington, DC, at the Atlantic Festival. Mary Louise Kelly, a host of All Things Considered on National Public Radio, interviewed him about a book he had written titled On the Other Side of Freedom: The Case for Hope.

As he was describing some of his experiences and sharing his opinions about activists and protests, I downloaded his book to my Kindle. The next day, I was on a phone call with my dear friend and long-time colleague, Caryn McTighe Musil, and she told me that she had been up since very early morning reading a book that her daughter had sent to her. The book was Mckesson’s On the Other Side of Freedom. As she described what she was reading, she emphasized that Mckesson wrote that “hope was work.” Even as Caryn explained her interpretation of what Mckesson meant, I did not grasp the way he might be connecting hope and work. Then I read the book. OMG!

If I were not reading the book on Kindle, I would run out of tape flags to mark the pages I want to reread:

This young man who shows up everywhere in his blue vest brings the message for the times we live in. He both deconstructs and enlarges the media sound bites and snapshots of protests to reveal the motivations and sacrifices of those who know the urgency of sounding the alarm for those who have become complacent or have chosen to accept things as they are. Mckesson’s book can inspire by helping readers understand that hope is about the work that needs to be done to create the world we must imagine.

I’m late to the conversation because others have already recognized Mckesson with honors and accolades. This gifted young man is a quintessential leader for our time. Mckesson is no longer on the periphery of my vision and attention. My eyes and attention are locked on him because I think he is the real deal. He writes:

I often think about God in the context of activism as reminding us of our moral courage—of being a compass as we navigate key moral issues, those of good and evil and those of justice. Moral courage is the courage you summoned because you are firmly rooted in the righteousness of the task at hand. (11)

From the essays in this book, I believe that his work is his church. I think that his congregation consists of all the people he meets along the way who are voicing the wrongs and outlining the way toward the right. The essays indicate that his sacrifices are real.

That activists and protests mattered then and now should never be in doubt. Mckesson confirms this for me when he writes that “protest is a precursor to the solution [and] creates space that would otherwise not exist, and forces conversations and topics that have long been ignored into the public sphere.” (122)

I encourage others to read this succinct and brief dispatch filled with words of wisdom. It could change your mind and your life.

Source: Flickr/ via U.S. Department of Education (CC BY 2.0)

Enrollment managers hold an important and key role to helping colleges and universities enhance the student experience. Every institution has them. They are key players not only in helping the institution meet enrollment goals, but graduation goals as well. These professionals share values and accountabilities with faculty and student affairs, as well as every functional area of the college or university. They are, therefore, favorably positioned to help faculty, staff, and administrators provide the return on investment that today’s students expect.

Several years ago, I was to be the commencement speaker at a college. It was a bright sunny day, and there were rows and rows of people as far as I could see. The stage was full of robed dignitaries and student speakers. I was one of the two African Americans on stage – both getting honorary degrees. In addition to my being unnerved by my own audacity in accepting the role of commencement speaker, the other African American who was receiving an honorary degree was none other than the excellent speaker and brilliant astrophysicist Neil DeGrasse Tyson! To say that I was anxious is an understatement.

Once the preliminary remarks and introductions were over, students’ names began to be called. As they walked across the stage, I forgot about my own stage fright and began to enjoy the celebration. As each student’s name was called and the happy student walked across the stage to receive the diploma and shake hands with administrators, some were beaming with grins and others were crying tears of joy.  I was so happy for them that my face began to hurt from smiling so broadly for so long.

I noticed that the line that had been going rather swiftly up to the point of shaking hands with the administrators was backed up where students were exiting the stage on my far right. I peered around to see what was happening and saw that, as the students were exiting the stage, an admissions professional was standing where the students descended, smiling, shaking hands, fist bumping, high fiving, and being enthusiastically hugged by many of the graduates. I smiled and thought to myself how right and fitting that the first person students encountered during the critical time of choosing this college was there to congratulate them as they graduated.

The idea of being there at the beginning and at the end makes me recall a conversation I had with a student at this same college who had been told that he should take this college off his list of possibilities for all the usual reasons first-generation students might not attend highly selective colleges. The student, however, left the college on his list and his high school counselor scheduled an appointment at the high school with someone from the Office of Admissions. He was late for the appointment and the admissions director asked him why. Usually reticent to talk about himself, especially with strangers, this simple inquiry from the admissions director opened the door for him to share more about himself than he ever would have expected. He thought his chances were not great for being accepted and, if he were accepted, he knew he could not afford to attend. He couldn’t even afford a trip for a campus visit. To make a long story short, he was accepted, received a scholarship, and received funds to visit the campus. Seeing the campus was love at first sight for this student. But something was bothering him.

He said he hated systems and didn’t want to be just another number in an affirmative action system where he wasn’t really seen for who he was. He said that this feeling was a like a cloud overshadowing all the good that was coming his way.

He told me that, early during his first semester, he had an occasion to see the admissions director who interviewed him at his high school. She remembered him and everything they had talked about. He was amazed that she remembered him, and this made him feel good. Shortly after the conversation with this admissions director, he had an encounter with another director from the admissions office. When the director learned the student’s name, he said with a friendly smile, “Oh, yes, I remember reading your essay.” The student said that he thought, “Wow! Maybe I’m not just a number in a system after all.” The student said that these same admissions directors reached out to him to see how he was doing throughout the semester. He said that their genuine attention was a strong motivator for him to do well because his family was in another country and had no idea what life was like for him as a college student in the United States. I can imagine the long hug at the end of the line during commencement when this student crosses the stage and sees his admissions directors.

So, if you find yourself confounded by how different your incoming class is than previous classes of students, don’t wait for the next popular publication: talk with your colleagues in enrollment management. They can give you information about students who are attending your college or university rather than a generic broad-brush description of a new generation of students.

Enrollment managers, more than anyone else on campus, know why students choose to come to a given college or university. It would serve institutions well, then, if enrollment management staff were significantly integrated within the academic community. We all know that a major reason why students do not persist in college is because their expectations are not met. Congruence between expectations and what students find is what is ultimately called “fit.” We speak of “fit” during the recruitment process, but “fit” is really not determined until the retention process is in play.

Professionals in enrollment management do much more than recruit students and provide a pathway to aid. They share the responsibility for students’ success with every other part of the academic enterprise.