The faces behind the numbers

Assessment…culture of evidence…outcomes…data-driven…accountability…. By whatever name it’s called, I am an advocate for using numbers as evidence of the impact of the work of student affairs.

On opening day of the spring semester before students returned, the Montgomery College community held its convocation for faculty, staff, and administrators. The president spoke courageously and eloquently, as always, and each of us who is a senior vice president had an opportunity to report on the work of our areas of responsibility:

Instead, I decided to talk about a student I had gotten to know. So with that student’s collaboration on what I could share, I told his story. At a time when community colleges are focusing particularly on the enrollment, retention, and success of African American and Latino/Hispanic males, this story was about an African American male. 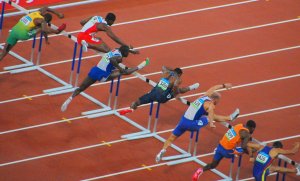 I showed a visual of young athletes running and jumping hurdles in a competition and then I began the story:

Imagine that one of these talented students is James who is typical of many of our students who despite their gifts and talents have many hurdles to clear before they reach the finish line. For the sake of these students and their peers, we all should be grateful that there is a Montgomery College with talented and dedicated faculty, staff, and administrators such as you.

James graduated from a high school here in Montgomery County and began his college career at Bowie State University. He was at the University but not really engaged because he went home every weekend.

At the end of his first year, he found out that there was not enough money for him to re-enroll for the second year. This fact was a disappointment, but he was not passionate about college and really didn’t have any direction.

Because he is a talented person, he was able to easily get a job with the Park Service. After some time in this job, he became bored because he was not using many of his numerous skills. While he was working at the Park Service, some of his friends from high school talked about their ambitious plans, and he began to feel as if he was being left behind.

Bored and discouraged, he began to spend his money on drugs and quickly became addicted. This was a really low point in his life where it seemed that everything he touched, rather than turning to gold, became ashes and worthless. One day he had a really bad car accident. One so serious and catastrophic that he should not have been able to survive, but he did. During his time of recuperation, he began to reflect on his life and realized that he was throwing it away. He was grateful to be alive and wanted to change the trajectory of his life.

When he thought about what he might do, it was as if everything he could imagine himself doing was a closed door, and when he opened the door, the message was always “a college education is the gateway to success.” So as soon as he was well enough, he quit his job and applied to Montgomery College—the College in his community. He was feeling great with these decisions, and he said that there was fire in his belly to make something of his life.

After being admitted to the College, he applied for financial aid and discovered that he was ineligible for aid because he had worked at what he called “that dead-end job” the previous year. He felt as if the door of opportunity had been slammed in his face; he felt rejected and discouraged.

Someone in the Financial Aid Office told him that he might be able to get a job on campus as a student assistant (student assistants are paid from the College’s operating budget) and walked him through the process. He had skills and was readily hired to work in one of the offices at the College. Working at the College gave him more time on campus, and he felt as if he was finally connected to a community. He felt he belonged.

He sought counseling and advising. Working with a counselor, he was able to regain confidence in his abilities. He began to think about his purpose in life and wanted to chart a path to some concrete goals.

Working with an adviser, he was able to develop an educational plan that outlined what courses he needed to take in what sequence in order to reach his academic goals. Doors were opening again, one right after another.

After a year and a half, he was able to qualify for financial aid. The collaboration between financial aid, counseling, and advising provided the kind of assurance and monitoring that James needed to know that he was on the right track and that people cared about whether or not he succeeded.

The next Student Service James took advantage of was Career Services. Here he explored his options related to his interests and what he wanted to accomplish. Encouraged by his family, he was able to begin to dream big and see himself in a career beyond college.

James says that he is grateful to Montgomery College for being a major part of his life during a critical period. He hates to leave the College because of all the support he received and because of the fine faculty and staff he encountered. He knows that he has a solid foundation to be successful at the University of Maryland Baltimore County where he has been accepted. He completed his Associates Degree in December 2014 and will begin his studies in psychology in just a few weeks.

Montgomery College has great resources and an outstanding educational program. Collaboration up and down and across the College in a seamless manner is what contributes most to the success of students like James.

Out for constituent review shortly is a draft of the Student Success Policy. The Policy formalizes the College’s commitment to student success and the procedures outline clear and concrete ways that the College will implement key conditions that will have a high impact on student success.

Many of our students will not have the motivation that James had, so some of these key conditions for student success are mandated, such as advising for the creation of educational plans, assessment for appropriate course placement, and accessible and informative orientations. Our virtual orientation will be available for students who are unable to make a scheduled face-to-face orientation because we believe that orientation provides a vital bridge for students to transition into College.

As students return and as new students arrive, let’s keep James and his fellow students in mind that might have many hurdles to clear before they reach their goals.

A number of faculty, staff, and administrators told me after the convocation that they also had “James” stories, and they were glad to hear one of them shared.